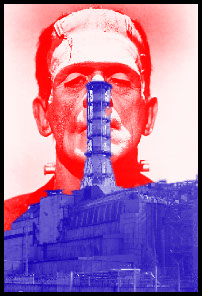 Walter Russell said that nuclear reactors will become “Frankensteins.” People would not be able to live within hundreds of miles of them, because they would become so radioactive. This has already happened.

At a nuclear research facility a scientist was experimenting with an atomic bomb core. He removed it from a secure locker, where a soldier was standing guard. An atomic bomb core, of this type was made of two plutonium hemispheres.1 You could think of it as a baseball cut in half. Except when the two halves come together, watch out. Our absent minded professor placed the first hemisphere in a test jig. And according to the experiment, he was supposed to put some “spacers” between the two halves to keep them from “going critical.” But this guy was so arrogant that he didn’t think all those “spacers” were necessary. With his friends observing, he started the experiment using a screwdriver to adjust the distance between the two hemispheres. As he moved the handle of the screwdriver in one direction the two halves separated and the radiation monitors in the building went quiet. Then he moved the two halves closer together. Click... Click... Click.. The sound from the speakers started making some noise. As he brought the two halves even closer together, you could hear a rapid Click, Click, Click – and then a stream of Clicks. This is a lot of fun. Moving two halves of an atomic bomb core closer together, and then further apart. This is what they call “Tickling the Tail of the Dragon.” Except the screwdriver slipped out of his hand. The two halves of the plutonium core came together. Whoosh. There was a huge flash of blue light. The absent minded professor felt a blast of heat going right through his body.

Radiation alarms were going off all through the building. He knew that he had to get the two parts separated right away. So he used his hand to separate them. The emergency was over.

Our absent minded professor got so sick he was vomiting constantly. His skin was a dark red, like he had a sun burn. His hand bloated up, to several times the size of a normal hand; and it had to be amputated. He died hours later. The other scientists did not receive as high a dose of radiation, and were eventually OK.

This kind of "criticality" accident was far more common than most people believe. There have been hundreds of these kinds of accidents over the past decades. In this podcast we discuss the history of nuclear energy, many of the accidents, and the secrecy that surrounds the industry.

Is nuclear energy safe? What about our planet? What kind of future might we have? These are all excellent questions. Walter Russell, called “The Man Who Tapped the Secrets of the Universe,” said that atomic reactors will become “Frankensteins” in the future. They will become so radioactive that people will not be able to live within hundreds of miles of them. No one will be able to go inside to fix them.

Samael Aun Weor, the founder of Gnostic Anthropology, said that some day scientists will do something to “Awaken a Giant.” This will kill lots of people. Why would both Walter Russell and Samael Aun Weor say such things? Scientists have been using nuclear energy for over 60 years. Isn’t everything all right? What can go wrong?

Perhaps it’s not the current reactor designs, as bad as they are, but the future designs that might be the problem. Scientists are planning on building two classes of nuclear reactors. First is the “all liquid reactor,” and second, is a breeder reactor called “Moving Wave Reactor.” Doesn’t that scare you? A nuclear reactor that “breeds.” Just from a conceptual point of view, do we really want nuclear reactors to make more of themselves?

Until now the so called “breeder” reactors have produced more fuel than they consumed. But, the fuel is a different type. The fuel from current “breeders” is not compatible to go back in to the same reactor. The new “Moving Wave Reactor” will change all of this. Now it will become a fuel creating “giant.” Is this what Samael Aun Weor was talking about when he spoke of “awakening a giant?” What if they retrofit the old reactors with this new technology?

God help us all.

1 This is a simplification of the story. However it accurately describes a typical “criticality” accident.

Correction to podcast: In this podcast I said that plutonium was found in nature. Very few plutonium nuclides are found in nature. For all practical purposes it is a man-made element. It is interesting to note that Walter Russell discovered, or predicted the existence of many ninth octave elements, long before scientists finally “found” them. Russell gave them his own names, but the scientific community changed them.

Why is Nuclear Fission Bad?