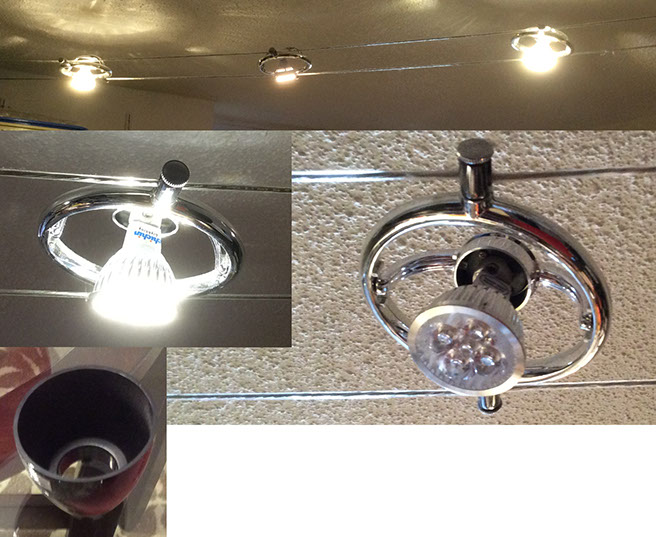 With all the different kinds of lights that there are for our homes it's difficult to know which ones are good and which ones are bad. I was constantly changing light bulbs and it seemed to me that there must be a better way than reaching in your pocket all the time to replace light bulbs.

The new LED light bulbs are supposed to last for 21 years or 25,000 hours. Does this sound like an outrageous claim? Are they really going to last that long? Time will tell.

I originally started with lights from IKEA. They were suspended from the ceiling by two wires and looked very elegant at the time. The power transformer was 12 Volts AC. Each light was halogen and was rated at 20 W. The light bulbs did not last very long. Over a short period of time I had to keep reaching in my pocket to pay for more and more light bulbs. So I looked into LED lights. I purchased 10 of them from Amazon.com (from China). The LED lights that I purchased operated on either AC or DC. The IKEA lighting system was AC and they were completely compatible with these new LEDs from China. Unfortunately they started flickering constantly one after the other.

They would turn on and off repeatedly. I would replace one faulty light bulb and within a short period of time another light bulb would start flashing on and off.

This constant flickering really annoyed me. Of course it would annoy anyone wouldn't it?

I replaced the transformer with what is called an LED driver. This is really a 12 Volt DC power supply carefully regulated. This nice smooth power from the 12 Volt regulated power supply really seem to improve how the lights worked. They seemed brighter. They didn't flicker, at least in the beginning. And I was very happy with the improved way they worked.

With DC current I still had a failure. One of the light bulbs in the series started turning on and off constantly. So I replaced it with a locally purchased LED. At the same time, I noticed there was quite a bit of heat buildup where the lamps were located. This configuration was really a plastic shield that the light bulbs were recessed into. So I examined closely the fixture and found that it was possible to rotate the plastic cover and remove it. As you can see by the photos, the lights were now free to have air ventilation around them. Now I have a bit of reflection from the ceiling which made for more light, not less. So with the new smooth 12 Volt DC power supply and having removed the heat creating plastic around them, I feel these new lamps will last a very long period of time. How long exactly is difficult to say.

I measured the temperature of the lamps and found that it was 35 to 55°C. 55°C is hot enough so that if you touch something at that temperature with your hand, it will be uncomfortable, you will not be able to hold your hand on it for any length of time.

If the temperature goes very much above 55°C the LEDs will start to fail. In the end I feel it was the excessive temperature that caused my failures with these LED lights.

We know that compact fluorescent lights or CFLs, are really bad news. If broken, the mercury inside will contaminate your environment and adversely affect your health. They also have a habit of burning down people's houses. The only good thing you can say about CFLs is that they don't use very much electricity. We have been using florescent lights for 100 years, believe it or not. Nichola Tesla was the inventor of these lights. If you're going to use CFLs, you should purchase the ones that are enclosed in a glass enclosure. The bottom line with CFL's is I don't trust them, and I don't think anybody should trust them. LEDs are certainly the way of the future.

After two years my LED lights have had only the occasional failure. They are very reliable.