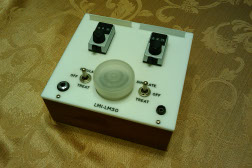 This is an example of a modern radionics machine

In this podcast we look at numbers and numerology from a completely different point of view. The story begins with Radionics, which is a system of healing involving numbers. These numbers are called “rates” in radionics. Where do rates come from; how do we use them; and what does it all mean?

The history of radionics begins with Dr. Abrams when he discovered that he could identify when a patient was ill by listening to certain noises in the human body with his stethoscope. Also, he found that when he connected a wire from the wrist of a “sick person” to that of a “well person,” the same noises could be heard in the “well person's” body.

If he disconnected the wire the noises went away. In other words, the wire seemed to “conduct” the “information” about the sick person's condition to another human being, even though that human being did not have any illness.  This strange discovery was ignored by official medicine and radionics is considered “quack medicine” by most doctors today.

Ruth Drown later expanded on these ideas and developed, what she called, “radionics machines.” She discovered two things. First, she found that she did not need to have a wire connecting the “sick person” to a “well person.” A small sample of the “sick person's” DNA , like a fingernail clipping or a hair sample could be used instead. Now it was possible to “analyze” the illness without the person even being there. Her second discovery was called “broadcasting.” This is where the process is reversed. Instead of “getting” information; now she was “sending” information to the sick person. The word “broadcasting” was appropriate because she could send “treatments” to a sick person, even if they were located anywhere in the world.

You will have to decide for yourself if there is any truth to all of this.