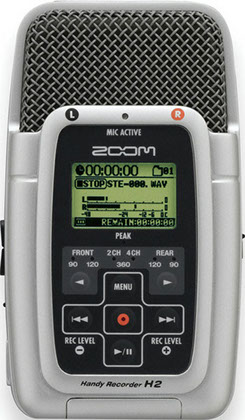 These products are now old, but the comparison still holds true.

I purchased the Zoom H2 at Long and McQuades here in Toronto, but returned it within an hour. I then, purchased the Tascam DR-07 and kept it.  This is what happened.

I could say a lot of good things about the Zoom H2 handheld field recorder. For example the microphone placement lends itself to interviews where you have people on both sides of a table. The 90 degree and 120 degree pickup pattern is really good. You have good control over what microphones are in use at any time. The sound quality is excellent. You can even record in 2 channel or 4 channel modes. On the down side, I found the screen and keyboard to be really tiny. The buttons are the cheap bubble style, that reminds me of a child’s game. The case is cheap plastic and the menu system really stinks. The unit I had was defective because there was an annoying distortion sound in every recording which occurred every three to five seconds. At first I thought it was the metronome, but discovered that that function was turned off. Why would you want a metronome in a recorder anyway? The main reason for not getting another unit is because I believe the sound quality at the high frequency end was a bit lacking. It sounded a bit muffled. The fact that my unit was defective should not reflect on your purchase. I believe this was an anomaly.

So I purchased the Tascam DR-07, which was not only cheaper, but I believe better. The screen, buttons and interface were all excellent. Although only a stereo machine, the quality of the sound I found was better. The built-in condenser microphones sounded like real condenser microphones. The “highs” were there. The consonant sounds were present. Not like the  H2 with it’s muffled sound. The Zoom H2 sounds like a field recorder; while the Tascam DR-07 sounded like real studio microphones. The directional pattern on the Tascam was like holding a flashlight – everything picks-up from the front. There is a very noticeable drop off if you talk from behind. Also any hand movement is recorded so watch out if you are holding it. Otherwise, any audio engineer would expect this. This unit is really good.

The Zoom H2 and the Tascam DR-07 are both really good field recorders. Since the purpose of a field recorder is to “record,” I feel the Tascam DR-07 wins. It makes the best overall recordings. Who needs the fancy 4 channel surround sound? I really think the H2 is gimmicky. They are trying to do too many things with a single device. I’m going to keep my Tascam DR-07.