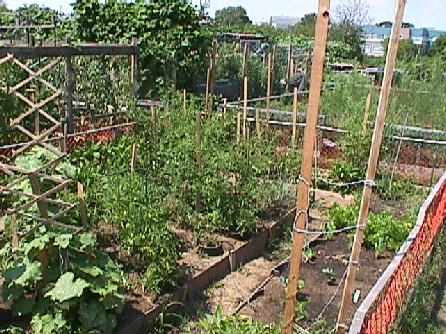 If you live in an apartment, gardening poses

many problems. In this episode we talk about how to:

In Toronto, the gardening season is short compared to some other parts of the world. It  goes from about May 24th to October. Jean has two garden allotments, which came about because she put her name on the list for both of them, and they became available at the same time. She had to oil the wheels, so to speak, otherwise she would not have gotten an allotment in the first place. The one garden is about 12 by 15 feet and it is run by a private club. The other is a city garden and it measures 25 by 25 feet.

The rules are rather liberal, except for the private club, which will only allow a two foot high fence. As long as you don't grow anything illegal you are all right. She grows broccoli, tomatoes, radishes, peppers, lettuce, cucumber, carrots, green beans, snow peas, raspberries and even roses – yes flowers.

Most of her vegetables taste very good because it's fresh. Supermarket produce has a bland taste because it has been on railway cars for months, before you get to eat it. Jean does not use any chemicals, but the municipal water she uses on the plants contains chlorine and fluoride. The fertilizer she uses is called triple mix as well as cow and goat manure. It's as organic as possible.

Raised beds are excellent if you are a bit arthritic or handicapped because you don't have to bend over as far. She says when she eats a lot of raw salads from the garden, her health noticeably improves.

Jean’s gardens are located on Hydro land, under electrical wires. Power lines don't seem to hurt plants, but may not be too good for humans. So don't spend a lot of time under the wires.

In the podcast we were trying to think of the name Jerry Baker, America’s Master Gardener at: