All four reactors at Fukushima Daiichi suffered massive nuclear detonations. But they say the radiation is minimal. "It's just like eating a banana."

On March 11, 2011 the tsunami that hit Japan as a result of a large earthquake, not only caused a huge loss of life, but also caused damage to nuclear reactors. The extent of this damage was reported to the people around the world as the situation unfolded. However, there is much to be said about what the general public has not been told about this disaster.

We will take a look at the WIPP (Waste Isolation Pilot Plant) facility in Carlsbad, New Mexico. Dana Durnford explains how a truck fire in this nuclear waste repository cannot cause the damage that was reported. It was actually a nuclear detonation. Mr. Durnford goes on to explain how a facility of this kind causes a tremendous amount of radioactive nuclides to be released into the surrounding environment.

We also take a look at what happened in Fukushima, Japan with the four nuclear reactors that suffered severe damage. These power plants went through a series of nuclear detonations. It wasn't a hydrogen explosion, it wasn't a steam explosion, and it certainly was not a banana that exploded. When criticality happens, if it's not controlled, this will result in a nuclear detonation. In other words, this was a series of atomic bombs. What happened at Fukushima, and what continues to happen to this day, is a continual release of very dangerous high level radioactive isotopes into the water, the air, and the land.

Does this all sound preposterous? I invite you to listen to the podcast and arrive at your own conclusions. It's time to put your radar up and connect the dots yourself. People nowadays have to use critical analysis with all the information that they receive. You can't just believe it, because it's on the news.

Note: In this podcast a small audio "clip" was used from Dana Durnford's video podcast from 2014, where he talks about the WIPP facility. His website is: thenuclearproctologist.org.

Above: Fukushima Daiichi reactors 1, 2, 3, and 4. To the right (not in the picture) are reactors 5 and 6. Building number 1 was on fire after the 9.0 earthquake, and before the tsunami. So all of these buildings were badly damaged before the water came.

This is reactor building number 4. The camera looks south, south-west. The lower left of the picture shows the turbine building. The lower right shows building number 3. The gray building (background) is a nuclear fuel reprocessing facility. Behind that building (Not seen in the picture, but to the south) is a huge nuclear waste storage facility. To the right (not seen in the picture, but to the west) is the common spent nuclear fuel pool. Experts believe this was washed out to sea, or damaged during the tsunami.

This is a close up of the inside of building number 4 before they removed the upper structure. In this case the camera looks to the north, north-west. We do not know how this photo was taken. It may have been taken with a drone, dropped from a crane, a robot, or a man. If it was a man, then he is long since dead. This yellow "thing" is the top of the steel reactor vessel. It "blew up" and landed in this position. In photo 1 you can see this from a different angle, but with the remains of the fuel rod support structures in front and behind this yellow "top."

This is, once more, building number 4. The camera looks north-west. You can see the building number behind the tree. Through an opening, you can see the same yellow "top" of the reactor vessel. In this photo, the upper superstructure is still in place. But, the building itself is completely destroyed. The fuel pools which were originally next to the reactor, could not possibly be still there. They have been dissipated into the atmosphere very early on in the accident.

This is a different angle of buildings 3 and 4.The camera here looks south, south-east. Despite what you have been shown on TV, anyone walking within 900 feet of these buildings will die. The gama shine, neutron burst, and x-rays will kill you. That's why TEPCO said, "Send us people that don't mind dying." 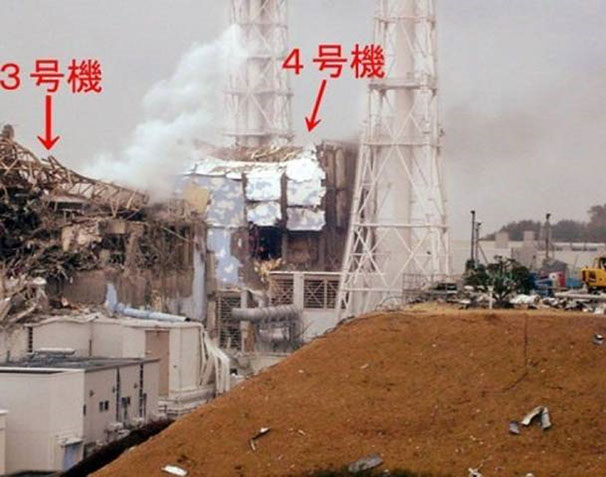