28 – The Microcosmos and the Macrocosmos 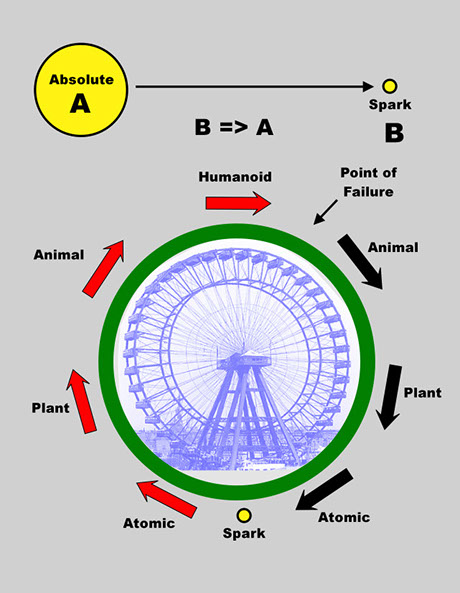 This diagram shows the “transmigration” of the soul through “creation.” Darwin’s evolution was wrong. There has never been a change from one species to another. What changes from one form to another is the soul or “spark.”

In the 1945 movie The Picture of Dorian Gray we have a Hollywood interpretation of the difference between the “microcosmos” and the “macrocosmos.” In the movie Dorian Gray was a handsome English gentleman who was worried about losing his youthful appearance. The central point of the movie was a painting that was made of him. The initial painting was not well liked by Dorian and he “cursed” it. From that moment the picture changed. Initially it showed him looking very beautiful. But over a period of 18 years it became very ugly as it reflected his evil activities in life. The real Dorian Gray remained youthful, but the picture became very hideous. In the end the situation corrected itself as Dorian Gray became old and ugly, and the picture was, once again, youthful.

One of the best kept secrets in the world is that if you change something on the inside, it will “automatically” change things on the outside. Jose Silva, the founder of “The Silva Method” taught people for many years about this power. If you need a job; get one on the inside first, then you will actually get a real job – on the outside. This is the basis of all “authentic” magic.

The best use of this “power” is the annihilation of our own ego. If you can destroy the negative tendencies within; then, you will slowly see signs of improvement in your own life.  This very high knowledge comes to us from the Gnostics.

As you discover the difference between the microcosmos and the macrocosmos you will change from being a “victim” of life to a “magician.” People who have power over their lives are magicians; and those that don’t are victims.

As a magician you are completely responsible for your actions. You have free will; but if you use it to cause suffering, you will pay for the consequences. If you make one person cry, you will have to suffer a thousand tears yourself.

The Picture of Dorian Gray was just a movie, but in the end Dorian Gray had to pay for his evil deeds.