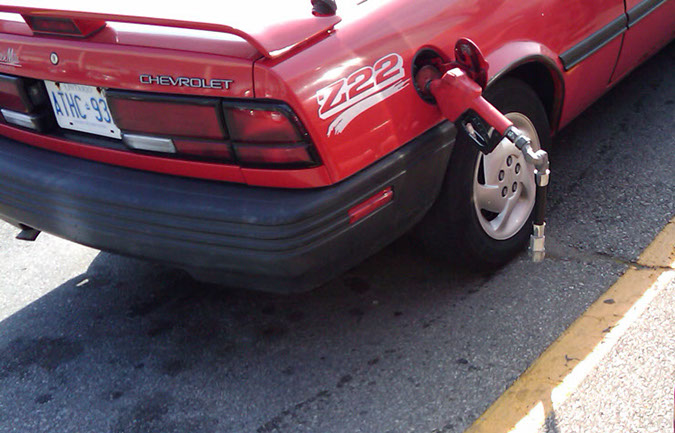 You don’t see this every day. When I pulled up along side this car at Shoppers World, here in Toronto,  I immediately took a picture. The driver obviously pulled away from a gas station with the filler tube still inside his car. I called 911 to report it to the police. They took the necessary information but the cops never showed up.

Because I am a male chauvinist I thought it was a women that did this stupid thing. Certainly it could not have been a man?  I was wrong. When the man came back to his car, he said “What’s that thing sticking out of my car?”

It turns out he was at a full service gas station and when he paid for the gas, the attendant said it was “OK.” Upon leaving, he was going over a severe bump and he heard a loud banging noise. He thought the car bottomed-out, but it was actually the end of the hose coming off the pump. He had no idea what had happened until he returned to the car.  In the end, he said he would go back to the gas station and straighten it out.

I guess these hoses have an intentional weak joint in them just for these occasions.

My wife said, “Gas prices are so high, you have to carry your own pump around with you” or “A super-duper siphoning hose, only $99.00”