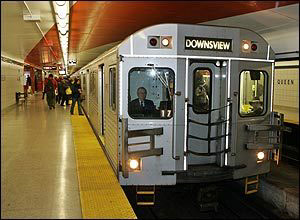 In this podcast Richard Roocroft interviews Mr. Brad Ross, Director of Communications, for the Toronto Transit Commission (TTC) about what happened in Toronto during the electrical blackout of 2003; the dangers of coming in contact with the 3rd. rail; how movies are filmed in a section of the subway that few people know about; the new streetcars that are coming next year, the LRT (Light Rail Transit) system and many other interesting topics. Mr. Ross says that the TTC is the third largest transit system in the world next to New York City and Mexico, carrying over a million and a half people each day.

Although delays are infrequent, when they do happen, the TTC has the ability to send messages to passenger's smart phones, outlining the problem, and what remedial action can be taken.

With interest in hybrid and electrical cars, the TTC has operated streetcars and electrically operated buses for decades. The power of a streetcar is enough to beat almost any car. If you were standing inside a streetcar while the operator decided to accelerate quickly, you would do well to hang on to the bar. These machines are very powerful and you might find yourself on the floor.

Mr. Ross says that the new hybrid buses did not work out as well as expected. This is understandable when you consider that buses are constantly accelerating and decelerating. Hybrid cars do very well if given a chance to drive at normal highway speeds. This gives the batteries time to charge. The new hybrid buses will have a different type of battery which is more suitable to the task. The TTC will emphasize clean diesel in the years to come.

Toronto is no different than most other large cities, as far as the general public is concerned. People have a certain love-hate relationship with their transit systems.  It’s clear the future for any large city is public transportation.

If you are thinking of visiting Toronto, you might want to listen to this podcast.